Another game of Warmaster sees the Tomb Kings ravaging the lands of the Empire. 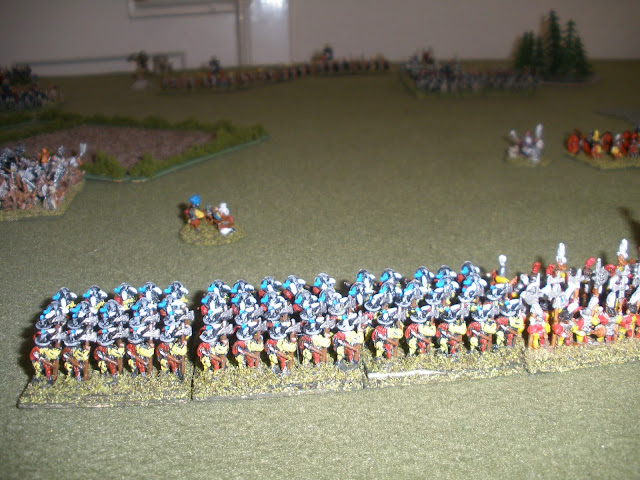 The cannons are ranging in on the restless dead. 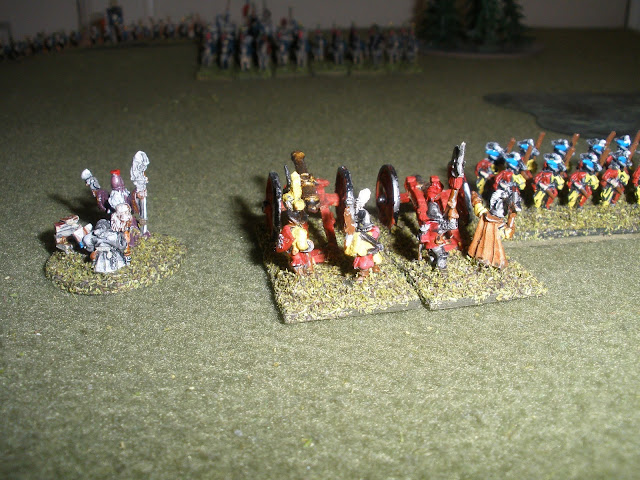 Knights occupy a hill on the Empire left flank. 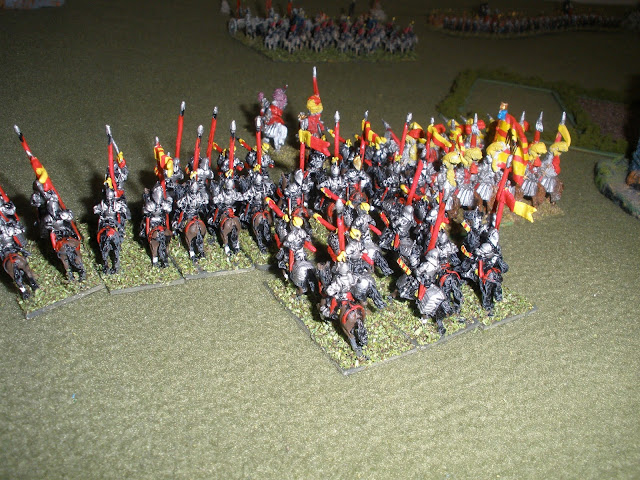 While the undead cavalry and chariots advance. 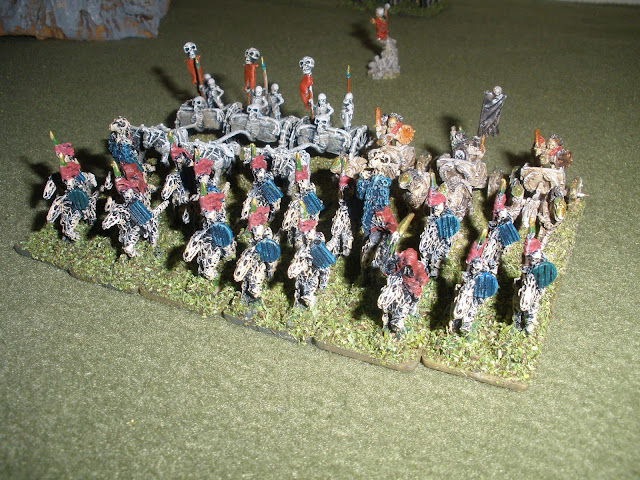 Flagellants work themselves into a frenzy. 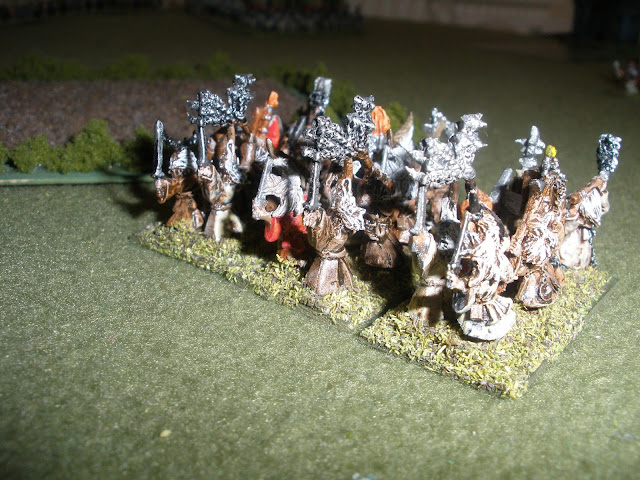 The Empire centre is reluctant to advance. 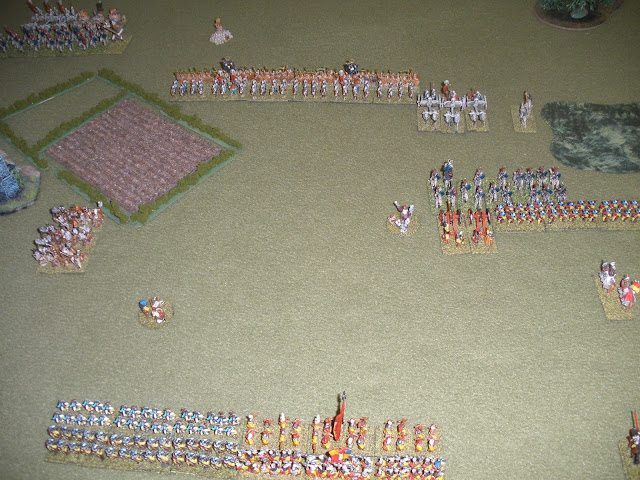 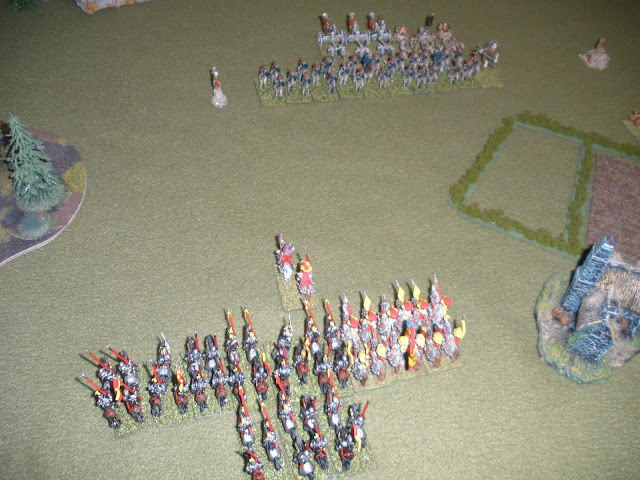 The undead left flank crash home against the handgunners and cannons. 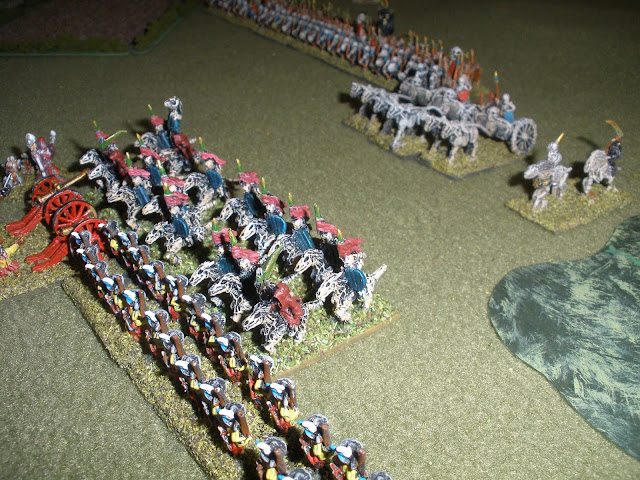 Despite firing grapeshot the cannons are overrun. 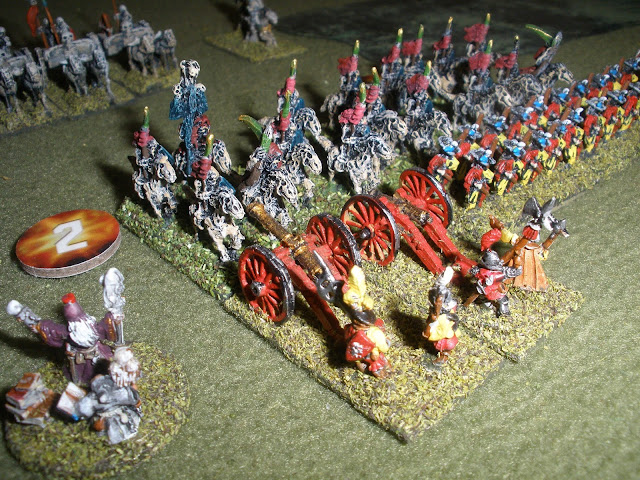 The knights are dazed and confused by a skull chukka catapult. (The red counter denotes confusion which is basically disorder). 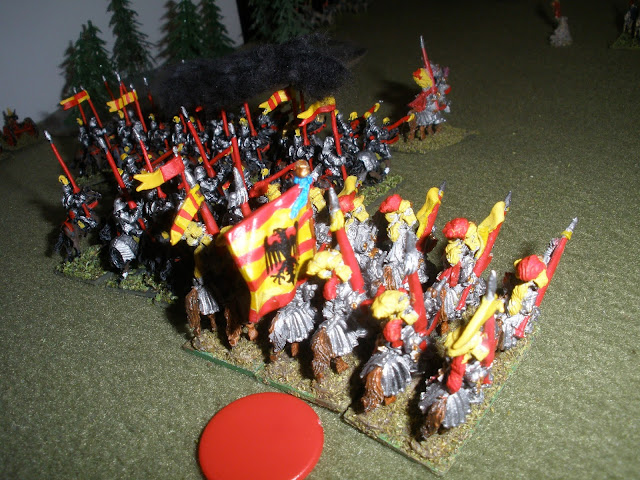 And a cloud of doom and gloom oppresses another unit of knights. ( I love this spell, it stops them charging or pursuing, with luck and good timing it can cause havoc). 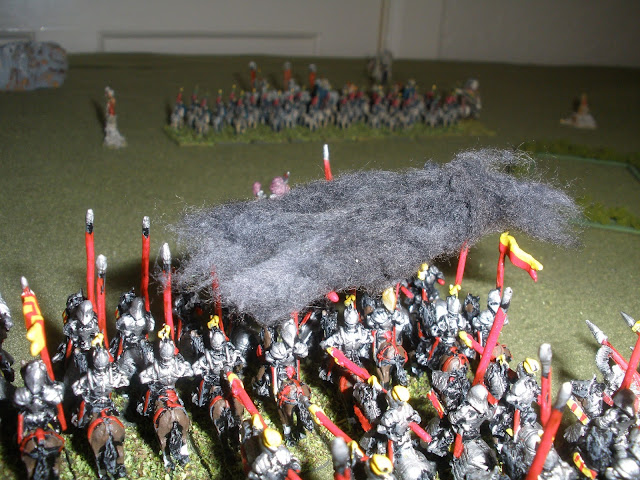 On the other flank the little Pendraken knights charge home. 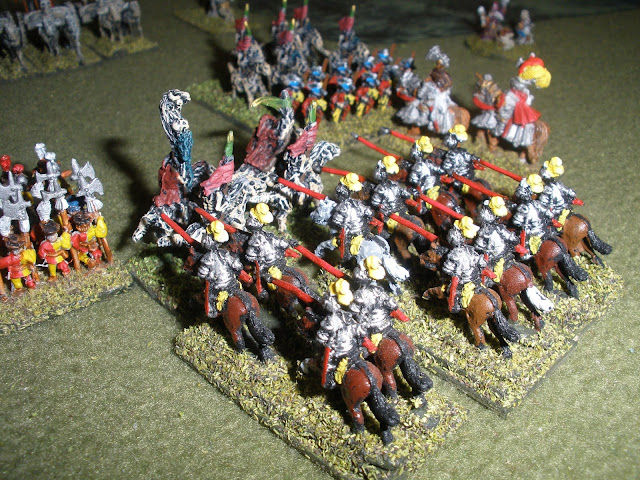 The crazed Flagellants scale the hedges and charge to their doom, proper radgy gadgies!, as they say where I come from. 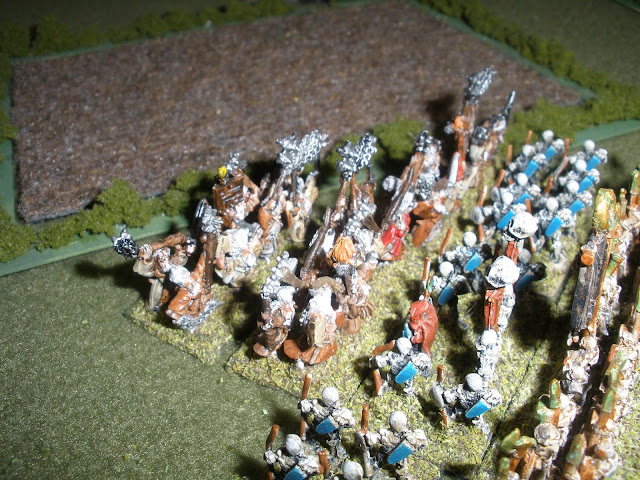 Severely disrupted by the skull chukka and doom and despair the knights attack goes in piecemeal. 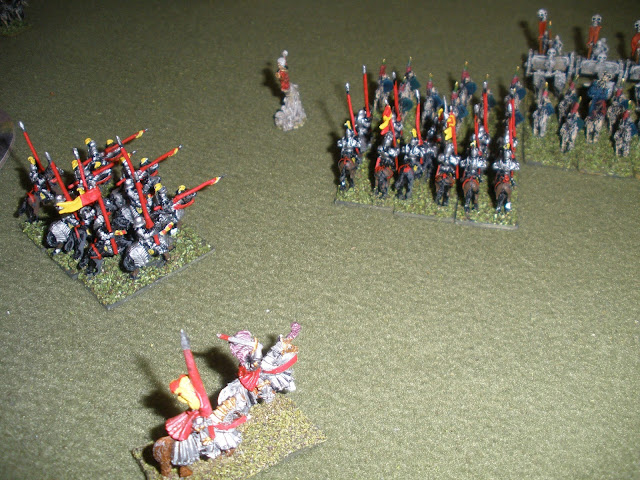 While the Pendraken knights are up against it. 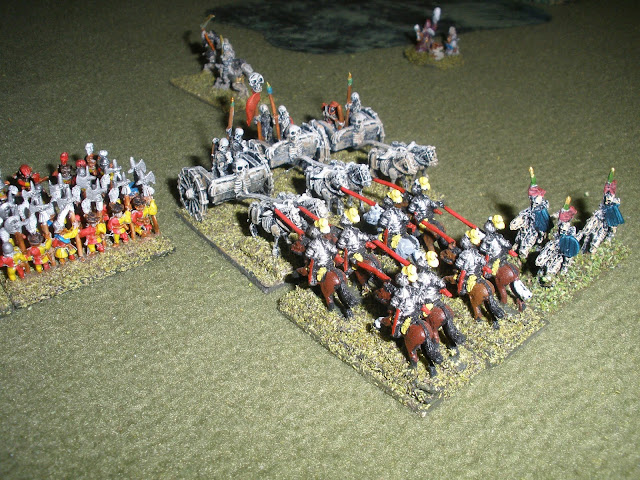 As are the left flank knights. 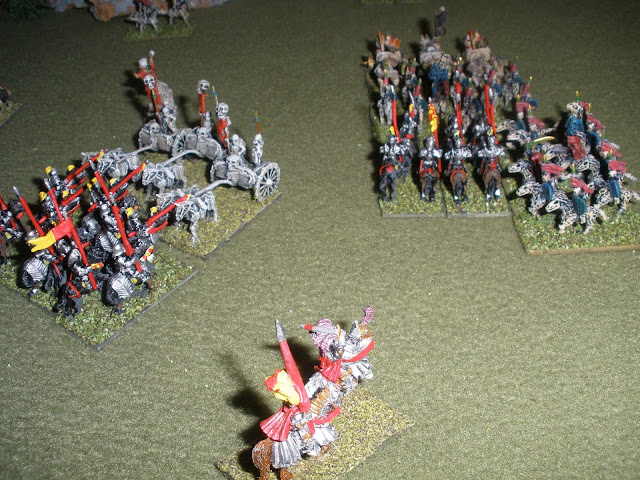 The Empire centre is driven back in confusion by bow fire and a cloud of doom and despair settles over them. 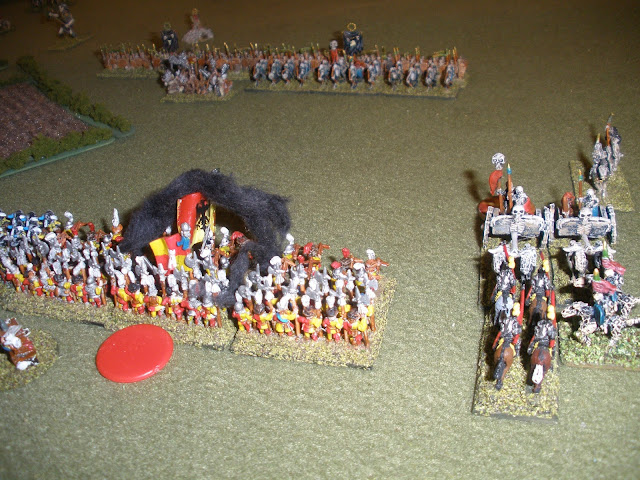 Things aren't getting any better on the Empire left. 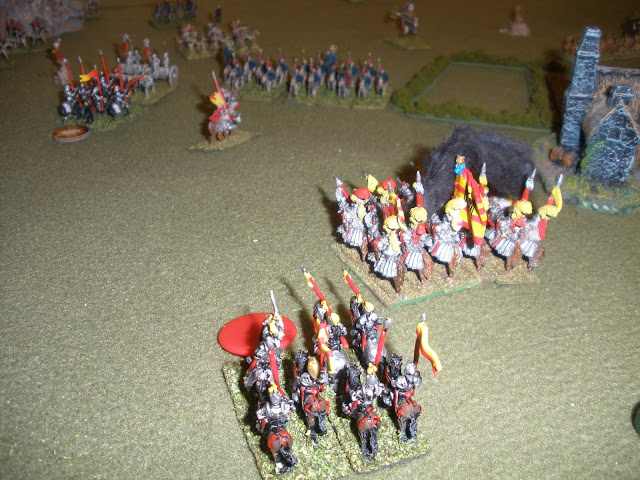 Slowly but surely the undead get the upper hand. 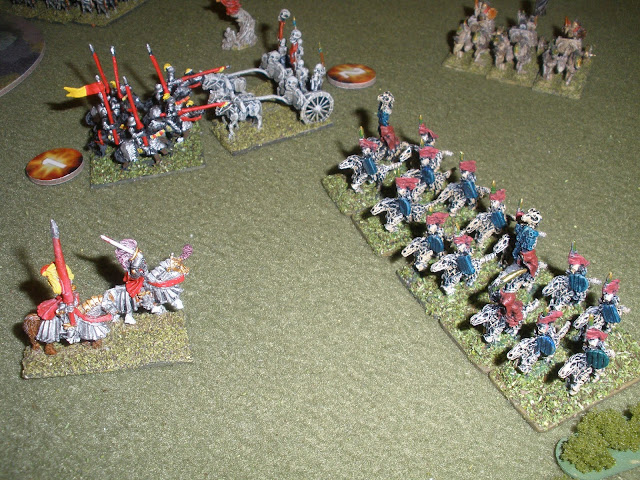 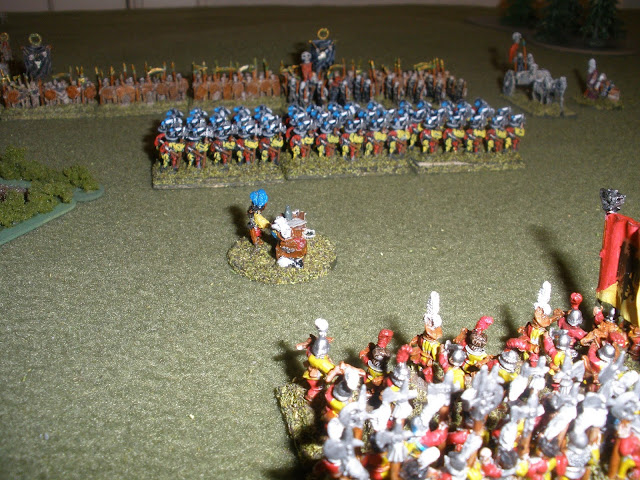 The Empire left flank is getting desperate. 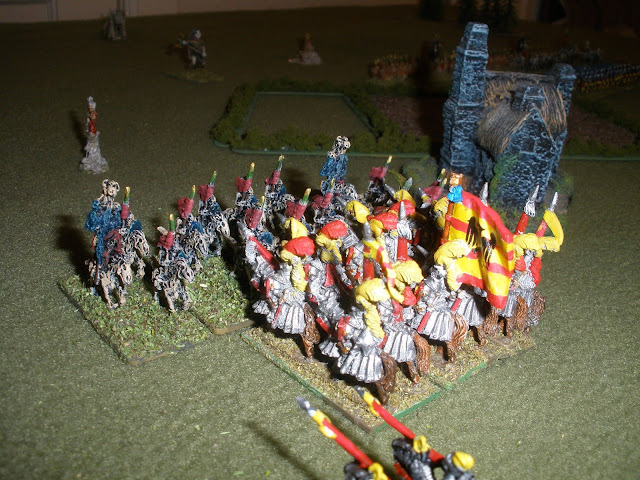 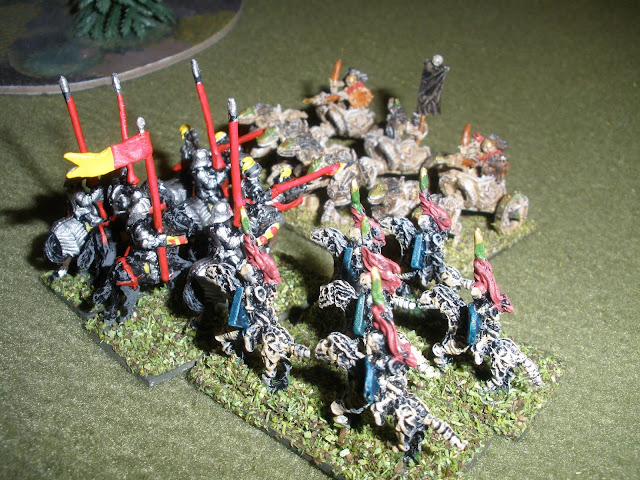 But are ultimately overwhelmed. 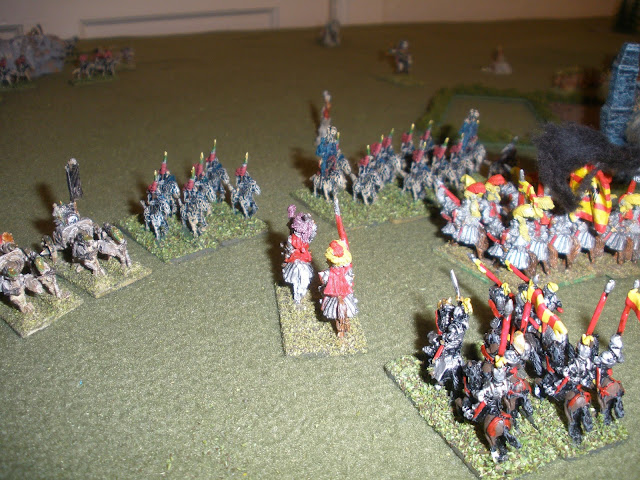 The Empire are defeated, they were on the back foot from the start and the Liche Priests played a blinder with their doom and despair spells. 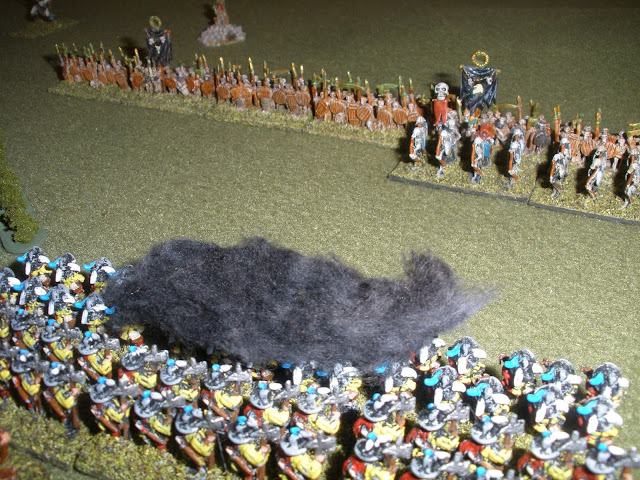 Another cracking game, the more I play Warmaster the more I enjoy it. I got these figures out of the cupboard to play Hordes of the Things and had a couple of good games but these Warmaster games have been much more entertaining.
In line with Warmaster Revolution and the Ancients version I cap combats at two rounds which prevents the possibility of rolling up an entire army with a well placed flanking unit.
I have added a link to Warmaster Revolution, the rules and army lists are available as a free pdf.
With the availability of stunning 3d prints from Excellent Miniatures and Printing in Detail and good metal ranges from Pendraken, Kallistra and others, Warmaster is having a well deserved renaissance.
Posted by Paul Liddle at 04:43